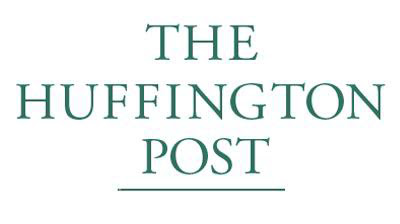 Chambers met on Wednesday with London Mayor Boris Johnson to discuss the plan. The former banker is hoping to have the Brompton Road site open in time for the 2012 Olympics.

The Wasylki Brothers start work on the documentary

Posted by The Old London Underground Company at 05:37 0 comments

Former station could be tourist attraction

A restaurant and a climbing wall could help turn a former tube station into a tourist attraction in its own right.

Brompton Road station in Knightsbridge closed in 1934, but now a former banker, Ajit Chambers, is hoping to lease it, and several other former stations, from the Ministry of Defence.

He is also in talks with Mayor of London Boris Johnson, as Transport for London owns the network, to support his plans.

http://kensington.londoninformer.co.uk/2011/09/former-station-could-be-touris.html
Posted by The Old London Underground Company at 02:47 0 comments

The mayor’s office revealed that Boris Johnson had discussed the plans with Chambers at the weekend, with the conclusion that more details would be put forward on potential sites and the level of work required for the renovation plans.

Chambers, 38, said: “We’ve set up the construction teams, the finance availability and the investment to renovate underground space.”

He revealed that he is aiming for a pre-London 2012 opening for the first site - Brompton Road station, which has been out-of-use for several decades. The MoD-owned site served as an anti-aircraft base during the Second World War.

The Old London Underground was founded by Chambers two years ago in a bid to breathe new life into forgotten sites.

The renovation plans would see a members’ club opened at the site.

http://www.londonlovesbusiness.com/tycoon-plots-200m-renewal-of-londons-ghost-tube-stations/470.article
Posted by The Old London Underground Company at 04:51 0 comments

A former banker has unveiled plans to transform London's abandoned Tube stations into tourist attractions, which could see restaurant jobs being created in the capital.

Ajit Chambers has teamed up with the Ministry of Defence (MoD), which owns the disused London Underground stations, to try leasing some of the sites, the BBC reports.

He is also in talks with London mayor Boris Johnson over plans to redevelop the likes of Brompton Road, which closed in 1934.

As well as creating chef jobs with underground restaurants, the stations deep-drop shafts could be used to install climbing walls, said Mr Chambers.

"Imagine the history and the historic meetings that went on here," he told the BBC. It is thought that Adolf Hitler's deputy Rudolf Hess was brought to Brompton Road station to be debriefed after his capture in Scotland in 1941.

This month the official opening of Nigel Mendham's restaurant THIRTY SIX has created several waiter and chef jobs in the capital.

http://news.caterer.com/article/view/london/800724379/restaurants-planned-for-disused-tube-stations/
Posted by The Old London Underground Company at 06:55 7 comments

London Loves Business runs a story on us

London’s got many ghost stations that you won’t spot on the tube map. Shruti Tripathi took an exclusive tour of the disused Brompton Road station- which might well be the next coolest pub or wedding venue.

http://www.londonlovesbusiness.com/londons-ghost-tube-stations/421.article
Posted by The Old London Underground Company at 03:56 0 comments 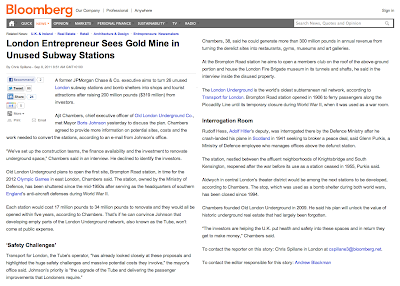 “We’ve set up the construction teams, the finance availability and the investment to renovate underground space,” Chambers said in an interview. He declined to identify the investors.

Old London Underground plans to open the first site, Brompton Road station, in time for the 2012 Olympic Games in east London, Chambers said. The station, owned by the Ministry of Defence, has been shuttered since the mid-1950s after serving as the headquarters of southern England’s anti-aircraft defenses during World War II.

Each station would cost 17 million pounds to 34 million pounds to renovate and they would all be opened within five years, according to Chambers. That’s if he can convince Johnson that developing empty parts of the London Underground network, also known as the Tube, won’t come at public expense.

Transport for London, the Tube’s operator, “has already looked closely at these proposals and highlighted the huge safety challenges and massive potential costs they involve,” the mayor’s office said. Johnson’s priority is “the upgrade of the Tube and delivering the passenger improvements that Londoners require.”

Chambers, 38, said he could generate more than 300 million pounds in annual revenue from turning the derelict sites into restaurants, gyms, museums and art galleries.

At the Brompton Road station he aims to open a members club on the roof of the above-ground portion and house the London Fire Brigade museum in its tunnels and shafts, he said in the interview inside the disused property.

The London Underground is the world’s oldest subterranean rail network, according to Transport for London. Brompton Road station opened in 1906 to ferry passengers along the Piccadilly Line until its temporary closure during World War II, when it was used as a war room.

Rudolf Hess, Adolf Hitler’s deputy, was interrogated there by the Defence Ministry after he crash-landed his plane in Scotland in 1941 seeking to broker a peace deal, said Glenn Purkis, a Ministry of Defence employee who manages offices above the defunct station.

The station, nestled between the affluent neighborhoods of Knightsbridge and South Kensington, reopened after the war before its use as a station ceased in 1955, Purkis said.

Aldwych in central London’s theater district would be among the next stations to be developed, according to Chambers. The stop, which was used as a bomb shelter during both world wars, has been closed since 1994.

Chambers founded Old London Underground in 2009. He said his plan will unlock the value of historic underground real estate that had largely been forgotten.

“The investors are helping the U.K. put health and safety into these spaces and in return they get to make money,” Chambers said.

http://www.bloomberg.com/news/2011-09-08/london-entrepreneur-sees-a-gold-mine-in-developing-unused-subway-stations.html
Posted by The Old London Underground Company at 03:48 0 comments