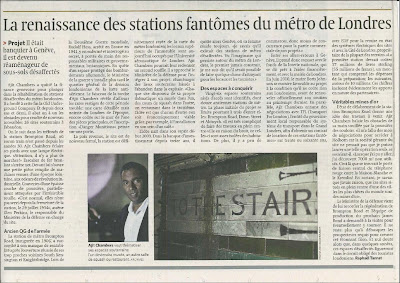 "Ajit Chambers, the Genevan who is reviving the ghost stations of London"


Ajit Chambers left working for a financial organisation in Geneva to dive into the rehabilitation of London's disused Underground stations. He founded for this purpose the Old London Underground Company and has spent two and a half years shooting down 'one by one' the obstacles to make available 26 new abandoned underground sites to benefit London's tourism economy.

Last week 'Le Temps' followed him in the depths of the Brompton Road station, where no train has passed since the 30's. Between his trips to Geneva he has spent serious time preparing his financial model ready for the worlds investors to see on the 2nd of September. Ajit has also received a pledge from the Mayor of London, Boris Johnson, that the project will go ahead ''as long as it doesnt cost a penny of public money''. The Mayor has regularly renewed his support for the project, notably last spring on BBC Parliament TV in his own office he called Ajit ''A brilliant Gentleman''. In parallel, Ajit Chambers began negotiations with L.U. (London Underground), the local government entity responsible for the transport system in Greater London to obtain leases of these "ghost stations" to create a group of tourist attractions that will benefit London's economy and pay directly back into London Undergrounds budgets.

...then there is no doubt that in a few years, these abandoned spaces will be included in the circuit of every tourist that visits London.

Mr Chambers, who will put his case to the Mayor in September, is optimistic. “I have a feasibility team ready to go in. All we need is a green light from Boris.” he says.

Similar projects abroad have proved successful. For example, Xiuli Hawken, ranked 61st in the Sunday Times rich list, made her money by turning Chinese air-raid shelters into underground shopping centres. Professor Tony Travers, of the London School of Economics, says ''other countries make much more of their abandoned transport infrastructure than we do, City Hall seems to find it hard to bend TfL to its will.''

To read the article from the FT page spend a minute registering, then use the search bar to find the story by typing in ' the old london underground company'.

Whoever ventures down the disused underground stations in London starts a sinister journey back in time. After the first steps there is a misty smell that envelops the nose coming from the damp concrete walls that have been dormant for 60 years. Under the shimmering lights there is an old underground map dated 1942

‘That’s how long it has been empty ‘ says Ajit Chambers. The 38 year old ex-banker is one of London’s most famous entrepreneurs breathing life back in to the desolate veins of London.

Posted by The Old London Underground Company at 17:32 0 comments